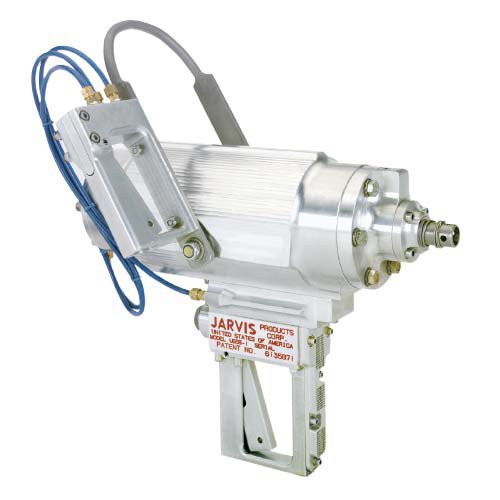 Abattoirs are required to slaughter all live stock in a humane manner and this involves an effective stun which immediately renders the animal unconscious. At present, virtually all cattle slaughtered in abattoirs are stunned using a mechanical bolt stunner. There are two types of stunner in general use:

These include cartridge-Bullet, pneumatic type

Irrespective of the stunning equipment used, it is essential that the animal is adequately restrained, so that the operator can place the device at the correct site on the head (in order to give an accurate stun).

Personnel who is stunning animals should:

The principles of penetrating captive bolt stunning There are three factors contributing to the stunning effect:

The principle of percussion stunning (mushroom head) The impaction of the heavy mushroom head of a non-penetrating stunner against the frontal bone of cattle causes a large concussive force to be delivered to the skull. This leads to a downward acceleration of the brain which is probably the main factor responsible for producing unconsciousness. Additionally, there is extensive damage to the blood vessels of the brain. As with penetrating bolt stunning, it is probably the velocity which is of major importance in determining stunning effectiveness.

This method of stunning is sometimes called ‘concussion stunning’.

Insufficient air pressure in pneumatically fired guns, underpowered cartridges for the size of animal and poor maintenance of the gun all contribute to reduced velocity and bad stunning. The operator should check to ensure that the bolt retracts to its full extent after each shot. If it does not retract, the instrument should not be used until the problem is rectified.

Assessing the effectiveness of a captive bolt stun

When an animal is properly stunned, it immediately collapses to the floor with its hindlegs flexed into the body. The forelegs may also be drawn in, but they straighten after a short period of time. The muscles of the body are contracted and the back is usually arched. If the body is relaxed, or if the animal makes kicking or paddling movements immediately after stunning or shows signs of trying to stand up it has not been stunned properly. Some kicking may set in after the initial muscle contraction phase. This is not a bad sign from the humane point of view, provided the animal has gone through the contracted (tonic) phase. The animal should not show regular rhythmic breathing movements after it has been stunned.

In summary, the major indicators of an effective captive bolt stun are:

Most guns are fitted with synthetic rubber rings around the bolt. These protect the gun from excessive wear and should be replaced at regular intervals (usually every 1,000 shots). If this is forgotten, there is a danger that the gun casing will eventually crack. When this happens the gun is potentially dangerous to all staff working in the area.

Special care is required with contact firing guns. These have to be forced against the animal’s head in order to get them to fire. If they are dropped on the floor or struck against the stunning box wall, the whole gun can become a dangerous missile.

Effect of Steam Vacuum on Animal Carcass
Scroll to top