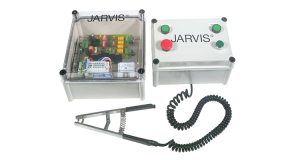 The term ‘electric stimulation’ refers to all currents applied to the carcasses on the slaughter floor, and includes those applied for the following reasons:

Modern electro-immobilisation systems incorporate medium voltage, high frequency waveforms which provide a still carcase after the current is switched off. This enables shackling to take place while the hind legs are relaxed. The current may need to be applied for a period of 6 to 10 seconds before this state of relaxation is produced.

It is well documented that beef carcass that cool rapidly may have poor meat quality as a result of cold-induced shortening and toughening. The Tender stretch process prevents the shortening of many muscles of the carcass and thus produces meat of superior eating quality. Where there is a preference for the conventional Achilles tendon hung—rather than the Tender stretch hung—beef side, it may be necessary to apply an electrical current specifically to prevent cold induced toughness. This process is referred to as ‘electrical stimulation’ (ES) and, for many years, was often the only electrical input (other than hide-puller stiffening) applied to the carcass. ES is used less commonly now as the combined slaughter-floor electrical inputs generally provide adequate stimulation. If ES is required, it can be easily applied to the beef sides via rubbing bars, prior to their entry into the chiller. For low throughput beef-processing plants, with few other electrical inputs, there may still be a role for the ES to be applied to the body after stunning and sticking via manually inserted nostril and probes.

Carcasses that have received several electrical inputs may reach their ultimate pH within a few hours of slaughter and, thus, can be assessed at an earlier time than would otherwise be permissible.

Stunning of cattle
Scroll to top